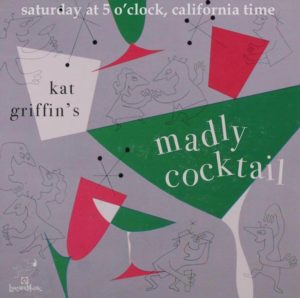 Kat Griffin is a public radio host at two Los Angeles stations as well as the LuxuriaMusic station den mother. She started in public radio way back when there was no internet at KCRW in Santa Monica as the ticket giveaway coordinator and live performance producer for Deirdre O’Donoghue’s SNAP, where guests included R.E.M., Crowded House, Joe Strummer, Steve Wynn/The Dream Syndicate, Brian Eno, Richard Thompson, and June Tabor.  This blossomed into opportunities as associate producer for the broadcasts of the Santa Monica Folk Festival and Los Angeles Festival, where she worked under director Peter Sellars. After many years of board op duties for Harry Shearer’s Le Show and other assisting and producing assignments at KCRW, she accepted her first hosting position, Madly Cocktail at another radio station. She’s been clutching that baby to her ever since, taking it from KCSN to KJAZZ, then back to KCSN again and the finally to where it was meant to be all along, LuxuriaMusic.