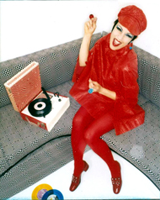 Agent Kari plays music that serves as a soundtrack to the groovy ’60s lifestyle she’s created for herself with clothing, interior design & a psychedelic mindset. On her LuxuriaMusic show, she spins songs that fall under her personal definition of Go Go—upbeat music that makes her want to shake it up in a chaotic and colorful fashion. She loves to dance, and that passion has led her to discover many of her musical selections.

For the past eleven years, this host of K.A.O.S a Go-Go (Kari’s Audio Orbit Shindig) has traveled undercover to 1960s-themed parties in Europe, performing/go go dancing under the alias Mata Kari. She focuses on 60’s garage and psych, especially tracks with fuzzy guitar & crazy organ grooves; but also likes freakbeat, funky soul, trippy rock, sexy soundtracks & jazzy library music. She gets especially turned on if any of the above are sung in a foreign tongue!