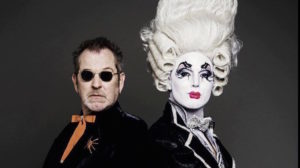 Hoffman is most noted for being a founding member and main songwriter/arranger of punk/pop legends The Mumps, with High School cohort Lance Loud. Mumps released two highly regarded CD compilations, with notes from folks like Sylvain Sylvain, Michael Stipe, Rodney Bingenheimer, and Danny Fields. Lance and Kristian were both denatured in the first ever “reality” T.V. series, “An American Family”.  C’mon, Margaret Mead liked it!  Other odd accomplishments are writing the pop hits for for ’80s cult legend Klaus Nomi.  His original song for Klaus Nomi “Total Eclipse” has been covered over 20 times, by Marc Almond and the like, but also occasionally by Korean piano trios who are all girls under 10 years old.   Hoffman has toured and performed with the Contortions, and James White and the Blacks, and Lydia Lunch.  Hoffman ahas four solo CDs, including his most recent, “Fop” which the L.A. Examiner called “Imaginative, playful, grandiose, beautiful, Wildean, disturbing, suggestive, evocative, an album that is at times both elegant and avant garde, both glam rock and modern orchestral symphony!” Previous to “Fop” he recorded an album of collaborations called, simply “&” – with duet notables such as Rufus Wainwright, Van Dyke Parks, Russell Mael (Sparks), Paul Reubens, Maria McKee and fellow Luxuriamusic DJ Michael Quercio.  The L.A. Weekly called this CD “the record every fan of the Beatles, the Beach Boys, the Kinks and great songcraft in general has been pining for.”  Hoffman produced and arranged three CDs for pop culture epiphany Ann Magnuson, has toured extensively as keyboard player for Rufus Wainwright and Dave Davies (Kinks). Hoffman has continued to perform and record with many peculiar notables like Alice Bag, El Vez, the Muffs (RIP Kim!), and Mink Stole (she covered two Hoffman songs on her CD!). His songs also have been covered by eccentric operatic performers like Timur Bekbosunov and Prince Poppycock.

Philosophy of my radio show: Take your mind on a technicolor trip down late 60’s/early 70’s baroque and lite psych byways with detours into the damage psychedelia managed to inflict on other musical disciplines like easy listening and garage. Special emphasis on OSP’s (other Sgt Peppers) and ORH’s (other Richard Harrises) and as many foreign language versions of same as I can dig up! With inexplicable detours into early punk and the Olivia Newton John cannon. Kristian also loves to host crazed and inspiring musical guests on his show, live, to see what untoward blind allies we can take a trip down. Previous guests have been the G.T.O.s and Melanie!

To derive the maximum pleasure from my radio show: Put on a Cossack Shirt, pour yourself a Maker’s Mark Manhattan with an acid/meth floater and whip out Parker Bros.’ “Tiny Tim Game of Beautiful Things”.

When I’m not DJing I can be found: Being the musical director at “Brookledge Follies” (a secret Hancock Park 20’s Theater run by the people who founded and still run the Magic Castle – and playing keys with the fabulous Roswell Sisters.

The secret superpower I possess: Keeping my Bee Gees records in the face of abject soul-destroying ridicule from my four brothers and two sisters and everyone at school.